Pintxos are typically finger foods, usually small enough to be eaten in one or two bites. The first pintxos were slices of baguette with various toppings, held in place with the cocktail stick or skewer that gives them their name – pintxo (in Basque) and pincho (in Spanish) means skewer or spike.

These days, pintxos are more diverse and the traditional bread and the skewer are no longer mandatory elements. They have developed from humble snacks to creative, culinary works of art on a plate. Molecular gastronomy sits alongside traditional pintxos, both taking advantage of the fantastic ingredients that the Basque region has to offer.

There are annual competitions where the talented chefs passionately compete to create the best pintxos, and the bars are rightly proud of their winning creations, with many becoming their star pintxo, or “pintxo estrella”. 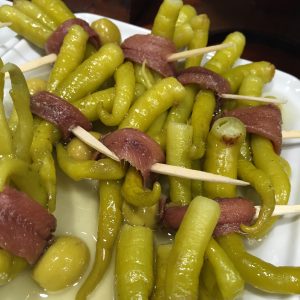 Legend has it that olives, pickled guindilla peppers and salted anchovies were first skewered together in 1946 by Joaquín Aranburu, a customer in Casa Vallés in San Sebastián, and at that moment the pintxo was born. He named his spicy and sexy creation the “Gilda”, inspired by Rita Hayworth’s character in the film of the same name.

These are the perfect accompaniment to a little zurito beer or a glass of txakoli – please make sure you try one!

“Txikiteo” is the Basque culture of going out for pintxos. You have a small drink and one or two pintxos in each bar, before moving on to the next. Pintxos are usually eaten as a snack to keep you going before a main meal, but whilst there are some fantastic restaurants in San Sebastián, nothing beats a good pintxo crawl that lasts a whole evening.

The way it works can vary slightly from bar to bar, but here’s how to do it:

A number of guided pintxo tours operate in the city, and they will deal with all of the ordering and paying for you – showing you the ropes and allowing you to relax a little until you’re ready to go it alone.

If you see any dishes using the following local ingredients then please try them.